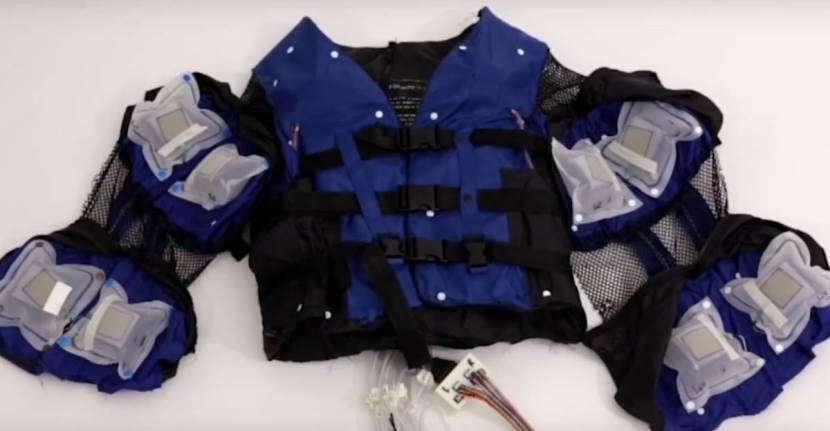 Despite the fact that many of us are technology lovers, we see how little by little the world of virtual reality evolves until perhaps it becomes everything that we were promised, for which perhaps there is still a long way to go, perhaps the last thing they end to present the Disney boys give us wings to begin to truly enjoy all that this wonderful technology has to offer.

On this occasion, Disney truly seems to have managed to go a step further, not in terms of graphics and others, but by designing a jacket that can make you finally believe that you are inside that virtual world that you see and hear thanks to a helmet that, for now, you must always wear.

Going into a little more detail, as you can see in the video that is located just above these lines, Disney engineers have developed a kind of prototype very similar to a jacket but equipped with a series of airbags that can mimic the pressure of certain objects with which you are interacting in the virtual world. Undoubtedly an element that, as they say in Disney, is destined to increase as much as possible all the sensations you experience when playing a video game or watching a movie.

To make this jacket the perfect complement for your escapades to the virtual world, Disney engineers have had to develop exclusive software to control all compartments or air bags. Thanks to this complex system, the jacket can reproduce a great variety of sensations adding new types of perception and depth to virtual reality.

Based on the statements of those responsible for this project:

The primary motivation for this research was to enhance the entertainment value of movie and game-based visual experiences by providing force feedback in various areas of our body.

Very few people who enter the world of virtual reality due to the little that this technology offers, at the moment

Without a doubt, we are talking about a technology that, although it still has a long way to go, the truth is that it can offer that sensory leap that many virtual reality users have been demanding for quite some time. This time the Force JacketThis is how this first prototype, created jointly by engineers from the MIT Media Lab, Disney and Carnegie Mellon University, has been baptized, it can offer very exciting sensations that will immerse you in a new world.

Internally, the Disney jacket features nothing less than 26 inflatable compartments that it can reproduce, as advertised in the paper which has been published to advertise this research, no less than a dozen effects. Among them, different actions have been simulated in a fairly faithful way, such as a hug, a blow and even a snake sliding all over the body.

These sensations can be created by modify the speed, force and duration of inflation and deflation of the air bags. In turn, it has also been achieved that both the pressure exerted by the jacket and the vibrations it produces are synchronized at all times with the images shown by the virtual reality helmet, which allows users to feel the actions they perform in their virtual world.

For now, we just have to wait to understand much better if with proposals like this a better adoption of virtual reality in the market is achieved. As a detail, tell you that, according to estimates, only about 6.4 million virtual reality systems have been sold worldwide, a figure much lower than the more than 2.600 million people who play any platform.