Asus recently launched the Zenfone 2 on the market as a 5,5-inch smartphone that offers the feeling of ruggedness when you hold it in your hand. A phone that passes what is called a phablet to offer us a good quality on the IPS screen with Full HD resolution and that lends itself as the perfect one to launch all kinds of multimedia content and enjoy an excellent Android experience which, in the end, is what it is about when one acquires a terminal of these dimensions.

We are going to comment a bit on the user experience after a few weeks in which I was able to collect part of what this phone offers in which its weight, 170 grams, and its thickness, 10,9 mm, are some of the handicaps that are It can be found for those who do not have a large hand and are not used to a terminal of this weight. Asus presents us with a smartphone that, with its 3.000 mAh battery, offers enough to get up to speed of life without any problem.

In the header, with the word balance, and in the first two paragraphs I have summarized part of the first sensations that one gets when having the Asus Zenfone 2 for a while. Its weight, robustness and thickness puts us in front of a phone that he appears sober and that is in seriousness where one finds another of its adjectives.

The first impressions go through the quality of its materials with plastic and with a screen that occupies 70,8% of the front space with very slim bezels, so the rest is taken up by the physical keys and the front camera at the top.

At the moment it is turned on we observe a good quality on the screen with 1080p resolution, and in the first notifications received, when starting the Google account, the sound is of great quality to offer a stereo that takes care of the multimedia content that you will start to play in it especially well. We can miss the front speakers, but nothing that tarnishes a good sound quality.

Asus is not going to have it easy with this phone, it has a great workmanship, but the fight right now is fierce in an Android market where smartphones arriving from China are making things very difficult, even for very popular manufacturers such as Samsung or LG.

The Zenfone 2 has its cards to play anyway, and part of them I have already said, to which we can add the photography that is at a good level, although it does not reach what is offered by the Galaxy S6, Xperia Z5 and other high-end such as Google's own Nexus 6P. This smartphone plays in another league and at other prices.

5,5-inch screen offers a lot of play and its IPS panel offers a good quality in the colors and in the sensations that are taken from it even with a good viewing angle. The truth is that it is a bit of pleasure to launch all kinds of video games and multimedia content such as series, videos on YouTube or movies if you wish, since in the 64 GB version you will have a large number of gigabytes ahead.

By having the very thin bezels And, although it has physical keys, the Zenfone 2 occupies a ratio just over 70% which is not bad at all.

If we join the 3.00 mAh battery plus Intel Atom chip, we find a terminal that, to have a large screen, arrives perfectly up to date without frightening us in between.

That 2.33GHz quad-core Intel Atom chip is paired with a RAM memory of 4 GB and a base of 32 GB in the internal storage, so with this we find the word balance as another with which the Zenfone 2 can be called very clearly.

It's a telephone balanced in all its aspects And this can surely be the most striking thing when one begins to dive for its hardware, software and the passing of the days where it is getting all its juice.

It will be difficult for you to find a phone with this size on the screen and with physical keys if one does not want to reach the prices of the Note 5 or Galaxy S6 plus.

From balance we go straight to performance where the Zenfone 2 performs very well. maybe one has to get used to the interface to go from one place to another on the phone, but the reality that you get a great experience in every way.

An interface, by the way, that reminds of Samsung's own Touchwiz, especially in the notification panel and in the settings screen, as it is joined by a huge number of its own apps. If you get rid of them you will get a better result and a longer battery life. Not that I want to blame Asus for its apps, and they are not bad either, but at the end of the day, normal users go through installing the most popular apps, so the less we have, the better. Needless to say, I'm more prone to a more pure Android custom layer.

However, with 4 GB of RAM we will have more than enough to have tens open and we can move from one to another with hardly any mess, so we return to balance to provide a great Android experience as the days go by.

Regarding the benchmarks, its score is with an average of 60.000 points approaching the LG G4 score with 65.507 points, so it is in a very good place, although far from Samsung's Galaxy S6 edge.

With a 3.000 mAh battery capacity, as long as we don't do crazy things, we will arrive in excess of the day, and that it has Android 5.0, a version that does not get along very well with the autonomy of the terminal, so when Marshmallow (Android 6.0) disembarks we can assure that it will improve in this regard thanks to the doze system that is included.

Here, as with other terminals, it will depend on the use we give to the screen, but it can reach 5 and a half hours if one controls the brightness well, since it is in this element where it can turn out to be consumed earlier than expected.

The Zenfone 2 camera meets very well in daytime photos, but where it limps is in the photos in low light circumstances where the noise appears too much.

With this said, the photos you take during the day, even if they do not reach the quality of other phones, yes they have detail, and like the terminal itself, it has a good balance in white balance and exposure.

Where it draws attention is in the speed of focus and shooting of capture, something that is at the height of other smartphones such as the Nexus 5X itself, which proved its worth in this feature when it was presented.

Other details to pay attention to is the manual controls options and certain aspects of the software such as timelapses, selfies, HDR mode and other functionalities already seen in other good-performing phones. In video recording we can forget about 4K to have only 1080p at 30FPS, not even 60 are available. 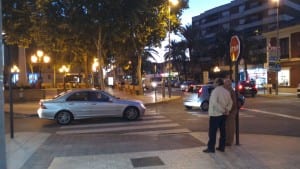 I think it is very clear with which type of smartphone we find the Zenfone 2. A robust, sober, serious phone and that in the balance we find its greatest feature. There is no walk that really stands out, so we stay as a whole to have a series of features that raise the average score to obtain a great Android experience.

A smartphone that may be too large for certain users due to its thickness, while for others the location of the power button seems strange at the top (this means that even with large hands you have to operate it with two hands) or that plastic looks like something from yesteryear, although it has that brushed metal look, but the truth is that once its € 349 is spent, one will not back down at all, as you will enjoy it more and more as the days and weeks go by.

We add to what has been said with a quick charge to have it charged in less than an hour and a half to get the 5 and a half hours of screen, and it brings us to a high quality Android smartphone and therefore its acquisition is highly recommended.

If you already decide on the 64 GB version plus a micro SD, you can delight in all kinds of multimedia content to take advantage of that 5,5-inch ISP screen.

Full path to article: Gadget news » Telephony » Móviles » Analysis of the Asus Zenfone 2, a phone in which the word balance resonates very strongly