The high-end in the world of mobile telephony has always been led by both Apple and Samsung, although in recent years, many have been the manufacturers who have tried to make the jump of category without success. LG and Sony are some of the examples that have tried but have fallen by the wayside. Huawei is the new contender trying to enter this category reserved for the greatest.

The Asian manufacturer, in recent years is doing very well and today we can consider it a high-end both for performance and specifications. To try to get rid of doubts in the photographic section, one of the main attractions of these devices, below we offer you a comparison of the camera of the big three of telephony: iPhone X, Samsung Galax S9 and Huawei P20.

The iPhone X has become the reference of almost 99% of Android manufacturers due to the notch where all the necessary technology is integrated to be able to use a facial recognition system to be able to unlock the device in addition to having reduced all the frames of the device to the max. The iPhone X camera system is made up a slow wide angle of 12 mpx with an aperture of f / 1,8 together with a telephoto lens, also 12 mpx with an aperture of f / 2,4, with which we can make use of optical zoom of up to 2 increases without losing quality in the photograph at any time. If we use the digital zoom, it reaches 10x.

The iPhone X screen, the first that Apple launches to the market like OLED (manufactured by Samsung), is 5,8 inches, has a resolution of 2.436 x 1.125 pixels with a density of 458 dots per inch and offers a wide color gamut (P3). Inside we find the A11 Bionic processor, a 64-bit processor with a neural engine and accompanied by a motion coprocessor. The A11 Bionic is accompanied by 3 GB of RAM, more than enough memory to move the system fluently, something that with that amount of RAM we cannot find in any terminal managed by Android.

Despite the criticism that the Galaxy S9 + has received for offering few novelties in its new flagship, this model offers us as its main novelty a dual camera on the rear, a dual camera with a variable aperture ranging from f / 1,5 to f / 2,4. Thanks to this aperture we can obtain clear images of very good quality and with which we can capture with very little light without the colors being altered or the sharpness.

Both cameras offer us a resolution of 12 mpx with Dual Pixel technology and integrate an optical stabilizer. The first offers us a wide-angle variable aperture, while the second offers us a fixed aperture of f / 2,4 and is used as a telephoto lens. The front camera is 8 mpx with automatic focus and offers us an aperture of f / 1,7, ideal for taking selfies in low light without having to use the flash that some models integrate on the front of the device.

The screen of the Samsung Galaxy S9 + reaches 6,2 inches, has a QHD + resolution with a pixel density of 570 in a screen format of 18,5: 9. Inside, Samsung has used the Exynos 9810 in the European version, while in the American and Chinese version, it has opted for Qualcomm's Snapdragon 845. The 6 GB of RAM and facial recognition to unlock the terminal are some of the other novelties that this terminal offers us with respect to the Galaxy S8 +.

Although it is true that in terms of performance the P20 model "just" we cannot compare it with the iPhone X and the Samsung Galaxy S9 +, if we talk about the quality of the camera, after testing it for a few days, like the Galaxy S9 + and the iPhone X, I have considered that it was necessary to offer a comparison, to demonstrate how good is not necessarily expensive. Regarding design, the Asian firm has chosen the same route as almost 99% of Android manufacturers, and it is none other than to copy for no reason the notch that popularized the iPhone X even though it was not the first terminal to go out market with that notch, as the honor goes to Andy Rubin's Essential Phone.

The screen of this terminal reaches 5,85 inches LCD with 18,5: 9 format and a resolution of 2.244 x 1.080. Inside we find the Kirin 970 processor accompanied by 4 GB of RAM, USB-C type connection and fingerprint reader on the front. The front camera reaches 24 mpx with a somewhat high f / 2,0 aperture to take selfies in low light. Huawei offers us two rear cameras in the P20 model, a 20 mpx mono camera and a 12 mpx RGB camera, with apertures of f / 1,6 and f / 1,8 respectively, which allow us to obtain images with low ambient light with very good results.

The portrait mode or bokeh effect that Apple popularized with the launch of the iPhone 7 Plus, cannot be obtained solely thanks to the double camera, although it helps a lot, since once the capture is made, it is passed through a software filter that takes care of analyze the whole image and blur everything that is the background of the image, leaving only the subject to be portrayed in focus. A clear example of the need for a double lens to obtain this result is found in the second generation Google Pixel.

Although being the first to launch a function or use a technology in a specific way does not mean that it is the one that offers us the best results, in this sense Apple is still the undisputed king in this comparison when we talk about portrait mode. As we can see in the images above, the iPhone X with its portrait mode is the terminal that offers the best blurring of portrait mode, followed by the Samsung Galaxy S9 +, with a similar blur, but that fails in some areas.

The Huawei P20 is the terminal that offers the worst result when using portrait mode, since the blur it offers us is very superficial and does not force us to focus on the object we want to highlight in that capture. In addition, it darkens the image too much, not offering us final colors consistent with reality.

Comparison between the iPhone X, Samsung Galaxy S9 + and the Huawei 20 indoors

In this comparison, we see how the iPhone X, like all its predecessors, tends to yellow photos. As for the grain, the Apple terminal offers us a very high grain compared to the other terminals compared, where the grain is practically non-existent.

The Huawei P20 is the best behaves when measuring the amount of light when there are two areas with different lighting, but that affects the rest of the image areas, by showing a very high noise in the upper left part of the image, so the final result deteriorates the capture as a whole.

As expected, The Samsung Galaxy S9 Plus is the terminal that offers the best results indoors, barely showing noise (grain) in the areas with less lighting (keyboard area), and with a very high sharpness despite the lighting conditions, although the area with a lot of light contrast, the result leaves something to be desired, but captures like of the image do not happen very often.

All the captures in this comparison are in their original resolution and have not been digitally processed so that you can see the result of the analysis first hand.

Comparison between the iPhone X, Samsung Galaxy S9 + and the Huawei 20 outdoors 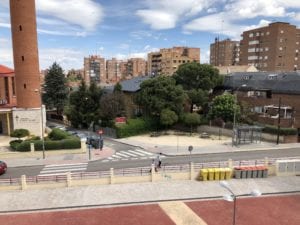 The three terminals offer us a more than acceptable dynamic rangeAlthough both the iPhone X and the Huawei P2o slightly saturate the colors, making them more intense than they really are, something that we can see both in the sky and in the buildings in the background. Although noise should not be present in this image, with sufficient ambient light, iPhone X manages to show noise in the area of ​​the yellow recycling bins, like the Huawei P20 although to a lesser extent.

Again, it is the Samsung Galaxy S9 Plus is the model that offers us the best results, without presence at any time of noise and with a very high sharpness. If it was already hard to beat the excellent camera that Samsung implemented in the Galaxy S8 and S8 Plus last year, these tests show us as if it was possible to improve it and more.

All the captures in this comparison are in their original resolution and have not been digitally processed so that you can see the result of the analysis first hand.

Comparison between the zoom of the iPhone X, Samsung Galaxy S9 + and the Huawei 20 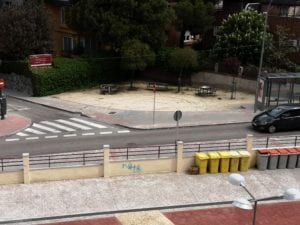 Leaving aside, the dynamic range that we have already discussed in the previous section and that is again reflected in these images, if we talk about optical zoom, both the iPhone X and the Samsung Galaxy offer us spectacular sharpness when it comes to zooming in and being able to read the red sign located on the left side of the screen. To enlarge the image captured with the Huawei P20, the poster does not show us the sharpness that we can see in the other two terminals, which forces us to strain our eyes to be able to read clearly.

All the captures in this comparison are in their original resolution and have not been digitally processed so that you can see, first-hand, the result of the analysis.

After analyzing these captures and many others made with the iPhone X, Samsung Galaxy S9 Plus and the Huawei P20, we came to the conclusion that Samsung's star terminal for this year, Galaxy S9 Plus wins by a landslide in all categories, being the best camera of these three models, and therefore, on the market. The high grain that the iPhone X shows us, even in bright images, is disappointing considering the price of the terminal and that the iPhone camera had always been a reference in the market. For a couple of years, its quality has dropped and it has been outperformed by Samsung quite widely.

The Huawei P20 camera, although it is true that it manages very well in high dynamic range images, in the same captures create weird effects and add noise that it should not be present in that area. In addition, the sharpness of the camera leaves a lot to be desired, an aspect that should be taken into account for future generations. I did not have the opportunity to test the camera of the Huawei P10, which everyone was raving about, but if the results were inferior to those of this model, the Asian company still has a lot to do in this regard, although Leica is, supposedly, behind.