Technology has advanced a lot in recent years, and if not tell all those of us who were born between the 70s and 80s. Currently most, if not all the televisions they sell are intelligent, and are under the name Smart TV. Following a few simple steps we can convert our television a Smart TV.

This type of television offers us instant information about the programs that are currently being broadcast on television, which avoids us having to resort to the famous and archaic teletext or use an application for the mobile phone or tablet. It also gives us access to endless content without having to move from the sofa, such as Netflix, HBO and other video on demand services.

But also, depending on the Smart TV model, we can also show the content of our smartphone or tablet directly on the television, ideal for when we want to play videos that we have stored on our device, show the photos of the last trip, surf the Internet and play content ...

But not everyone is willing to renew their television for a new one, since the one they currently have works perfectly and at the moment it shows no signs of exhaustion. In this article we are going to show you different options to turn our old TV into a smart TV that allows us to enjoy the advantages offered by this type of television.

HDMI cables allow us transmit both image and sound together in a single cableHence, it has become the most used connection in modern televisions, leaving aside the RCA cables and the scart / scart, which not only took up a lot of space, but also greatly limited the quality of the image and sound.

To transform your old TV into a smart one, you need an adapter that converts the signal via RCA or scart to HDMI. At Amazon we can find a large number of devices of this type. Here is a link to those that offer us the best quality / price ratio.

Advantages of a Smart TV

What options are there in the market?

In the market we can find a large number of options that allow you to turn our old television into a smart television. In this ecosystem, tWe can also find the typical struggles in Google and Apple, since depending on the ecosystem you are used to, it is likely that you should use one or the other. 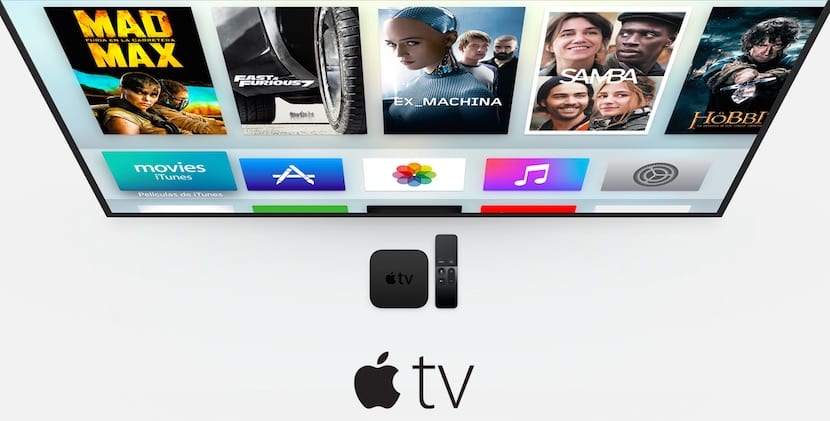 If you use a Mac, an iPhone, an iPad or any other Apple device, the best option you can find on the market is the Apple TV, since it allows us not only to send the content of our Mac or iOS device to the TV, but also furthermore, the integration within the ecosystem is complete. Also with the launch of the fourth generation Apple TV, Apple added its own app store, so that we can do use of Apple TV as if it were a game center.

Thanks to the large number of applications available in the Apple TV's own store, we can use applications such as Plex, VLC or Infuse to play the movies or series that we have stored on our computerEither Mac or PC. It also allows us to access all the content available on iTunes, to be able to rent or buy the movies that Apple offers us through this service.

Netflix, HBO, YouTube and others are also available for Apple TV as well as other applications of this type to be able consume any type of content without leaving our home, when and where we want. The rest of the options that we show you in this article do not get along so well with the Apple ecosystem, although by installing the odd application we can make the integration more or less bearable.

Google also joined the trend for this type of device relatively recently, if we compare it with the Apple TV, a device that hit the market in its first generation in 2007. The Chromecast is a device manufactured by Google that allows you to play content via streaming from your smartphone on television. It is compatible with both the iOS, Android, Windows and macOS ecosystem using the Chrome browser. The content that can be sent to the Chromecast It is limited to supported applications and the Chrome browser.

The Chromecast It has a price of 39 euros, requires a microUSB power supply and is very easy to configure. If we opt for the 4k model, Ultra, the price of it shoots up to 79 euros.

The Chinese firm also wants to get fully into the multimedia content that we can consume through our television and offers us the Xiaomi Mi TV Box, a device managed with Android TV 6,0, same operating system that many of today's Smart TVs offer us. Inside we find 2 GB of RAM, 8 GB of internal memory, USB port to connect a hard drive or USB stick. This device is capable of playing content in 4k at 60 fps without any problem.

In the market we can find a large number of devices that allow us to access the Internet, devices managed by a version of Android adapted to the television interface, as the Nexus Player offered us, saving the distances. Devices of this type come in all prices and specifications, but you must always bear in mind that the more powerful the playback, it will be smoother as well as faster, especially when we want to play files in mkv format for example.
As for the applications that we can install, taking into account that it is Android, have direct access to the Google Play StoreTherefore, we can install the Netflix, YouTube, Plex, VLC, Spotify applications as well as the different applications that the operators offer us to consume content from the smartphone or tablet.

Although it is true that Google's Chromecast is still a stick, I have decided to separate it from this classification as it is one of the devices that offers the best quality price in the market, in addition to having been contained in one of the most popular. But it is not the only one available. In the market we can find a large number of devices of this type of very varied brands but I'm only going to focus on showing you the options that offer us the best value for money.

Thanks to this computer integrated into an HDMI port, we can use Windows 10 on our TV, as if we had connected a PC to it. Inside we find an Intel Atom processor with 2 GB of RAM and 32 GB of storage. Integrates a memory card reader, 2 USB ports and the application is done through the microUSB port. Obviously it also has a Wi-Fi connection to be able to connect to the Internet and access the content that we need at all times.

The Taiwanese firm also offers us on the market a mini computer that connects to our HDMI port. It has two versions, one with Windows 10 and the other with ChromeOS. Its features are very similar to those found in the Intel Compute Stick, with a Atom processor, 2 GB of RAM, Wifi connectivity, 2 USB ports, card reader and 32 GB of internal storage.

This is one of the cheapest sticks that we can find on the market and that offers us greater compatibility with most ecosystems, since it is compatible with the Miracast, AirPlay and DLNA protocols as well as with Windows, Linux, iOS and Android.

For some time, consoles have become not only a tool to play games, but also offer us connectivity with the Internet to watch YouTube videos, enjoy Netflix, view content stored on our PC or Mac with Plex ...

Sony's PlayStation is one of the most complete multimedia centers that we can find on the market. Not only does it offer us the same connectivity as Smart TVs, but also it is also a Blu-Ray player, it has the Netflix application to consume content from its platform, Spotify, Plex, YouTube and thus a hundred very useful applications.

The main difference that we find with the PlayStation is that the Xbox One does not offer us a Blu-Ray player, which places it in inferior conditions in this aspect only, since it also allows us to enjoy Netflix, Plex, Spotify, Twitch, Skype … Also thanks to Windows 10 we can add a large number of universal apps currently available in the Windows Store.

The most modern Blu-Ray players, depending on the manufacturer, offer us practically the same connectivity solutions that we can currently find on consoles more modern that I have commented above, except the possibility of enjoying games. This type of player offers us a wide variety of applications with which we can access YouTube, Netflix, Spotify ...

One of the cheapest solutions What we can find in the market is the possibility of connecting a computer or laptop to our television. Depending on its age, it is likely that we do not need to buy an HDMI adapter for the television, since with the VGA port and the computer's audio output we can connect it with cables to the television without HDMI.

For some time now, we can find on the market a large number of basic computers, small computers that allow us to connect directly to the HDMI port of our television and through which we can access Internet content as if we were doing it directly from our computer, a keyboard and mouse.

A Smart TV is nothing more than a television with access to content located outside of it, either on the Internet or on a computer or on a USB stick or memory card. Raspberry Pi offers us a very economical solution for these types of cases, since by adding a Wifi module we can access any content located both within our network and outside it.

If we have an OTG compatible smartphone in a drawer, we can use it as a media center connecting it directly to the HDMI port of our television and show all the content of the screen on the television.

In this article we have shown you all the different options that we can find in the market to convert our old television, even if it is tube, into a smart TV. Now it all depends on the budget you plan to spend. The most economical method is by connecting an old computer to the television, but the functions available will be limited by the equipment.

If we really want compatibility and versatility, the best option are the set-top boxes managed by Android or the HDMI Stick managed by Windows 10, since they do not allow you to quickly transport it anywhere and also make use of them as if it were a computer, at least in the case of the stick with Windows 10.

Full path to article: Gadget news » Gadgets » The best devices to turn your TV into a Smart TV