If nowadays video cards are synonymous with great efficiency and work in any type of application running on Windows, Why do they fail when they are most needed?

Nobody gets to explain the reason why this happens, because even though Windows has been installed with the respective drivers and a few additional updates, the computer crashes with the typical blue screenWhen you start doing "extreme work" with Adobe Photoshop or a video game that requires all the operating system resources. A very easy and simple way to detect failures in our video card it relies on a simple tool, which has the name of "Video Memory stress Test".

The first situation that you should consider before testing your personal computer with this tool, is to know if you have installed the correct versions of drivers for that accessory. There are times when Microsoft usually suggests the compatible drivers for the video card that he has come to find on a personal computer, these being not the correct ones but rather, "the generic ones". If you have an installation disc, use it and configure the video card according to the manufacturer's options.

Using "Video Memory stress Test" in Windows and outside of it

Incredible as it may sound, a simple tool named «Video Memory stress Test»Has the ability to test the video card, achieving as a result, if it is in good or bad condition. According to the developer, its small executable of only a few megabytes has the capacity to give a great "stress" to the video card, which means that it will charge you with extra work to know how far it supports.

Once you go to the URL of its developer you will find two versions to use, one that is at the beginning of the page and the other in the final change. If you choose the first package and unzip it on your Windows personal computer, you can double-click the executable and start seeing the results. A screen very similar to the one that we will place below is the one that you could see, where the user will have to decide which video card you want to test. 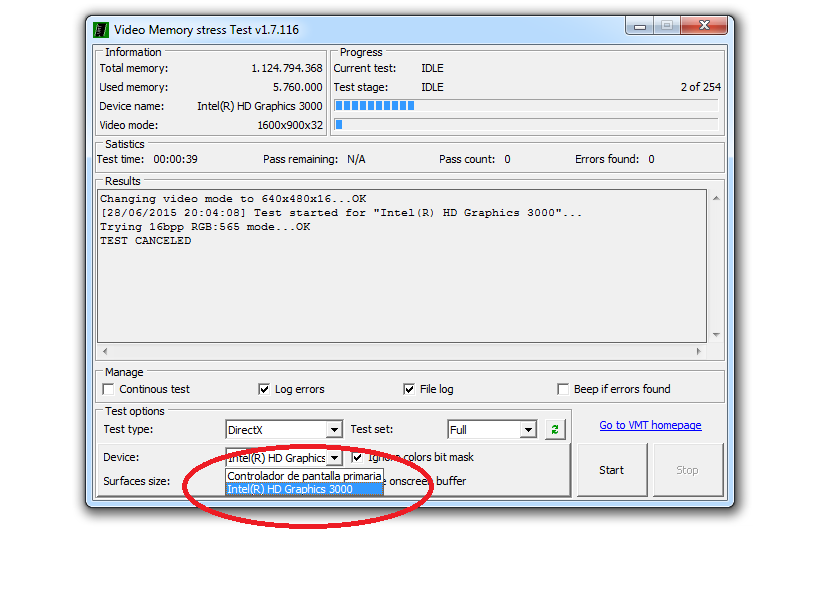 For our case, the tool has found us two video cards, being one of them the primary and the other the secondary because the HP personal computer model has both. Testing will cause the resolution to resize and a few windows will start to appear about the work the tool is doing on the accessory.

Versions for use with "Video Memory stress Test"

The developer mentions that the tests can be performed while Windows is working, and this is not the best option as the video card is receiving the load at the same moment of all the applications and the resources of the operating system. For this reason, you must navigate to one of its internal folders to find its ISO image, to which you can transport to a USB pendrive with the respective tool.

If you opt for this alternative, then you will have to reboot to the computer with the USB stick inserted the respective port. This is the best way to test the video card, since the computer and the graphics card are not receiving any type of load from the operating system.

Testing on older computers for the video card

Despite being a very remote situation, but the developer has placed in the final part of his web page a version that you can get to use with a floppy disk; there are the files necessary for the tool to run and their respective libraries, which will analyze the state of the video card in this type of computer.

For our part, we might recommend that you try install the correct drivers for your video cardWell, if you have installed some that belong to a different model, then you will be constantly receiving instability failures in your personal computer and in the work of each of your applications.

Full path to article: Gadget news » General » Software » How to detect failures in our Video Card with or without Windows