The "big day" of the South Korean firm has arrived, we have been in direct at the presentation of the new Galaxy 10 thanks to the #Unpacked held in MadridHowever, Samsung's high-end phone is not the only thing that has been presented, we have a good battle of new devices like the Samsung Galaxy Fold, the new foldable phone, new rivals for the Airpods with the Galaxy Buds and of course two renewed versions of the Galaxy Watch Explorer and the Galaxy Fit.

Stay with us to find out which are all these new devices with which Samsung wants to completely conquer the market, and know both its price and its final characteristics.

How could it be otherwise, much of the role is taken by the phones of the South Korean company. On this occasion, just like Apple did, the guys at Samsung have chosen to launch three different sizes of their flagship, however, they are ordered by size and by features. Predominant the Samsung Galaxy S10 + with its 6,4 inches that shares identical characteristics with the Samsung Galaxy S10Except for higher battery capacity, a special ceramic version with up to 1 TB of storage and 12 GB of RAM. In addition, the second great differentiating aspect of the Galaxy S10 + will be a double front camera.

In turn, the Galaxy S10e will offer us a 5,8-inch panel and a double rear camera, unlike the triple camera shown on the Galaxy S10 and Galaxy S10 +. They coincide in turn in the rest of the characteristics, except that there will be a slightly cheaper edition that will have 6 GB of RAM and 128 GB of storage, although we can choose the version with 256 GB of storage and 8 GB of RAM if we wish. The battery, due to size issues, also drops to the 3.100 mAh compared to the 3.400 mAh of its older brother, but they coincide in most relevant characteristics. However, in order to make the unit cheaper, this time Samsung dispenses with the on-screen fingerprint reader, moving to place it on the side of the frame.

Highlights of the Galaxy S10 family

We have to make irremediable mention of the fact that Samsung has decided to bet on the on-screen fingerprint reader for the Galaxy S10 and Galaxy S10 Plus, regardless of any type of frame, and leaving only the "freckle" where the device is located. front camera sensor of the Galaxy S10, double sensor in the case of the Galaxy S10 Plus. However they coincide in the screen resolution both the Galaxy 10 and the Galaxy S10 Plus offering a Dynamic AMOLED panel with 3.040 x 1.440 px, that is to say in its 6,4-inch version as in its 6,1-inch edition.

At the processor level we will find as always two versions, one with the High-powered Qualcomm Snapdragon 855, and the one that will almost certainly arrive in Spain, which is the Exynos 9820 manufactured by Samsung itself. At the storage level we will range between 128 GB and 1 TB, while in terms of RAM we will range between the 6 GB offered by the S10e version, and the 12 GB of the ceramic version of the Samsung Galaxy S10 Plus. We finish with some of the most relevant news that cannot be missing in a terminal like this: 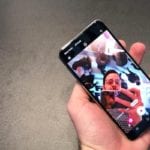 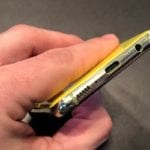 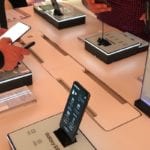 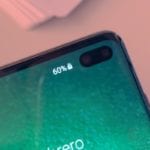 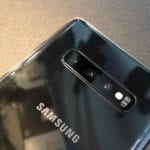 The same happens at the level of autonomy, where in the Galaxy S10 + we are going to reach the not inconsiderable amount of 4.100 mAh, accompanied by far by the Galaxy S10 that will have 3.400 mAh and the Galaxy S10e only 3.100 mAh that will leave us in doubt about the total performance, although it is presumed that the Galaxy S10 + It will be a clear winner in this regard, where Samsung has never particularly stood out.

Samsung Galaxy Buds, the new rivals for the AirPods

Samsung once again renews its range of True Wireless headphones with a design that is quite reminiscent of past editions. We got a first look at the Samsung Galaxy Buds, small headphones that will, of course, have a carrying case and the pampered design that Samsung usually put on your devices.

At the design level, they have decided to demarcate a bit from what the competition offers, focusing on creating a quite differentiated device. This time we can opt for a white edition and another black edition of the Samsung Galaxy Buds that will surely delight many users.

Samsung has also not missed the opportunity to renew its range of smart watches, we find the Samsung Galaxy Active that dispenses with the mobile crown and frame, to integrate an all-screen watch with a completely round dial that will be offered among other colors in silver and pink with silicone straps. It will have the characteristics of a watch from the South Korean firm and a very nice and easy-to-wear design.

Two renewals for the designer bracelets with rectangular display and silicone straps, Classified as the best on the market for functions and features, replacing the Galaxy Gear Fit Pro and Galaxy Gear Fit ranges. Undoubtedly two good devices that will be launched at affordable prices as happened with the previous versions and that have effectively captivated the audience present at the presentation.

And this has been all about the #Unpacked of Samsung that has been celebrated today February 20 and that has left us a string of good devices.

Full path to article: Gadget news » General » Samsung Unpacked: This is the Galaxy S10 and the rest of the devices launched