Many times we are focused on bringing to our analysis table the most powerful phones or with a better relation between quality and price to convince the most advanced users and in turn help those who have doubts about the device they are going to acquire but ... What about those who are not looking for the latest technology but a device that is easy to use and adapts to their needs?

Today we bring you a device designed for the most special users, the SPC Jasper It is a mobile phone for seniors with two screens, many applications and large keys, get to know it with us. And if it convinces you, now you can get it the best price from this link.

As always, I remind you that in the upper part we have a video in which we have made a small analysis of the device together with the unboxing so that you can see all the content inside the box, the easiest and fastest way to take a look at it and above all to know in depth what our opinions have been about the device.

We start with the basics, the exterior. We have a smartphone in a "shell" format, this thing that is so fashionable now again but has always been with us, especially those of us who are somewhat "older" know these types of devices in depth. On the outside we have a small color screen and on the inside another one of almost three inches at low resolution, accompanied by a numeric keypad with many shortcuts and very intuitive.

The phone is entirely made of plastic, it is quite light and at the same time gives a pleasant feeling of resistance. The battery is removable, it is behind it where we find both the slot for the microSD and the slot for the traditional SIM card. On the sides we have the volume keys and a direct access to the flashlight.

Has SPC Jasper convinced you? Well then don't wait any longer and buy it at the best price by clicking here

As you can imagine, this phone has quite simple technical characteristics, but they perfectly accompany the performance that can be expected from such a device. For this the first thing is that they use kaios, an operating system based on Linux and that allows us to have installed by default Facebook, Google Assistant, WhatsApp and other similar applications such as Maps. 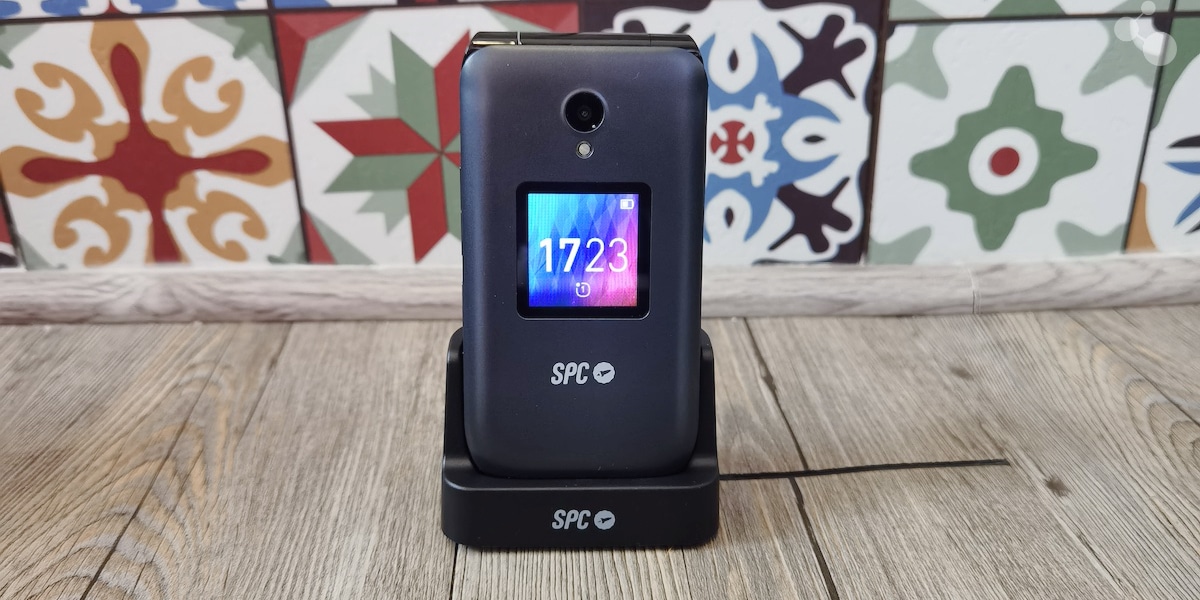 The main screen is 2,8 inches at QVGA resolution, in the same way that the keyboard is correctly illuminated for the situations in which it is necessary. The main camera, which is used both for taking selfies and for traditional photographs, is 2MP. As for the functionalities We are also relatively well served: Vibration, flashlight, alarm, calculator, FM Radio, browser, calendar, GPS, text messaging ... etc.

The battery is another decisive section, we have a battery de 1.600 mAh That may seem little for a traditional smartphone but that is sufficient in these conditions. For this we have a microUSB port at the bottom but that we are not necessarily going to have to use, since Jasper from SPC has a pair of pins at the bottom that serve to charge the device in the charging base that is included in the package and that will help the elderly to not have to constantly deal with the microUSB port at the bottom. This custom of charging bases has unfortunately been lost by traditional brands and I think it is a very interesting addition. After all, SPC promises about 260 hours of standby, Than less than two to three days of traditional use without any charge.

The section on autonomy for logical reasons has not been raised as a general problem.

This SPC Jasper features WiFi, yes, only compatible with 2,4GHz networks, the truth is that it would not have made sense to include compatibility with more complex networks. We have signal indicators, compatibility with networks up to 4G so speed and coverage outside shouldn't be a problem. In fact, we have had a quite satisfactory result in regard to the WiFi antenna with respect to its range, so in these terms it will not be a problem, something common for devices in this range.

We also have USB-OTG to be able to connect a USB memory, as well as the possibility of adding a card microSD up to 32GB if we want to increase the storage of the device. We do not forget that this SPC Jasper has a port 3,5mm minijack to be able to connect headphones, something that is appreciated, especially since much of the audience of this device, which also has Bluetooth 4.2, you will make regular use of the radio. And these are mainly the characteristics that we have analyzed from the SPC Jasper, and without standing out for speed or fluidity, but giving an acceptable result, it seems to lack practically nothing.

In short, we are facing a clearly niche product, it is a smartphone because it has applications, its own operating system and is designed by and for those who reject the smartphone format that is currently used. The device is definitely considered an interesting alternative at a relatively moderate price. (click here to buy) for those who strongly bet on this type of device, a market in which, by the way, there is not much to choose from. Let's talk now about what we liked the most and what we liked the least about the terminal:

What else I liked it is its ease of use and that it does not give up a list of basic applications that can give a new life to the terminal despite being clearly designed for the elderly.

The least It is the fact that the resolution of its screen and the brightness it offers are so limited, I don't think it would have cost much to bet on a better panel, especially considering the moderate size.

This device costs 99,99 euros and you can buy it in the SPC website, at the usual points of sale and on Amazon at the best price in this link.