Year after year, torrent websites They are still very popular among users instead of the pioneer Emule, where through the application itself we could search and download the content we wanted at that time, and proof of this is the ranking of sites that allow us to download torrents made by the firm torrenfreak.com. If last year The Pirate Bay was the undisputed leader, due to the problems it has suffered in the months leading up to the end of the year when the Swedish authorities suspended the service, this year it has dropped to second place. In the first place we find the alternative that many users had to resort to in the absence of The Pirate Bay, which is none other than KickAssTorrents.

Although it is true that some of the servers that host torrents are blocked by some operators, bypassing the block is very easy, since we only have to use an anonymous proxy that allows us to do it for free, not all of them are free, but yes we search a little we can find more than five. Then I leave you with the classification of the best torrent sites of this year 2015. 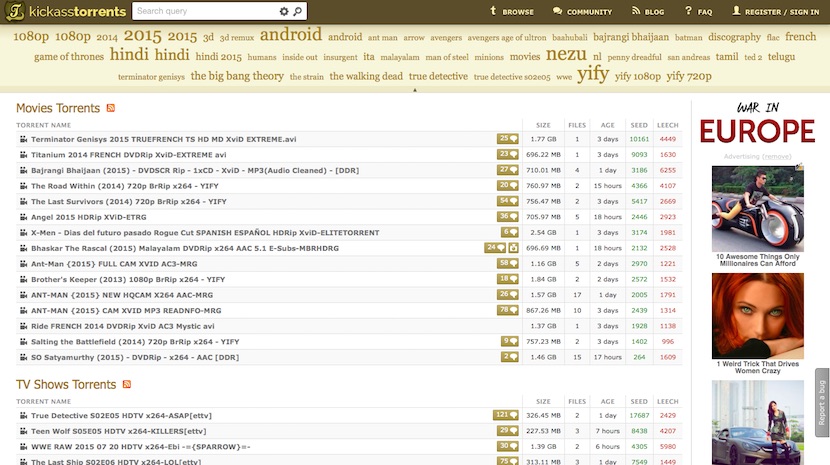 As I have commented previously, KickAssTorrents has become the preferred site for torrenting users. Founded in 2009 last year, taking advantage of the problems of The Pirate Bay, it managed to overtake it and be in first position. Last year it was in the number 2 position of this ranking and according to the Alexa ranking, KickAssTorrents We find it in position 151.

Second we find Torrentz, torrent search engine which has been available for many years, but unlike other websites, this one does not host torrent files, but is only dedicated to linking directly to the websites that do offer them. Last year it was in the third position of the ranking and in Alexa we find it in position 206 of the most visited websites.

ExtraTorrent is one of the most active communities on the internet in relation to torrents, since it is users who post the links as they find them online. It should be noted that this does not mean that the links can contain malicious files since administrators check each and every one of the links posted by users. According to Alexa, ExtraTorrent it is in position 356 of the most visited web pages and last year it was in fourth position.

The Pirate Bay (copies and clones). After the temporary disappearance of this website, many were the clones and copies of this website that saw the light while the owners of the original website managed to re-launch the service. Since the last few months have been out of circulation, Alexa has not been able to provide a reliable reading of the data obtained, so we cannot inform you of its position in the ranking at the end of the year. As I mentioned above, last year this website was leading the ranking of the best torrent sites last year. 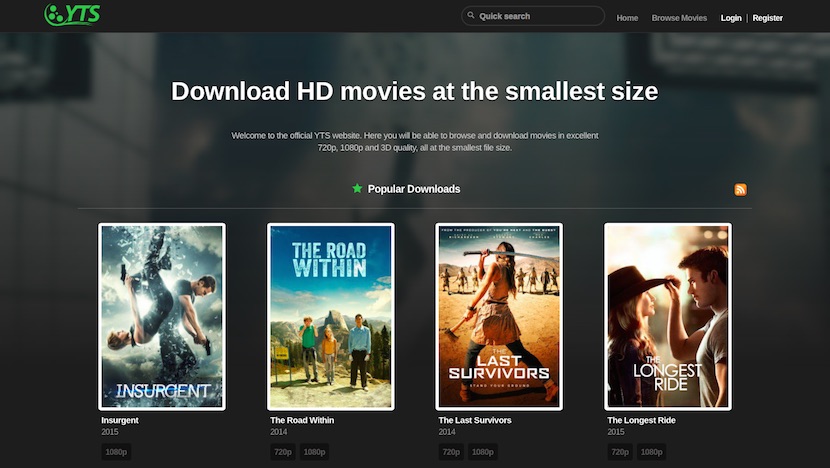 YTS belonging to the YIFY group, has become one of the torrent websites to download movies most popular in recent times and is a source of headaches for the film industry. In fact, the High Court of Justice in England has blocked access to this website throughout the country. Blocking that we can avoid using VPN services as I have mentioned. Last year we found this website in the fifth position, while according to Alexa data, YTS was in position 740 of the most visited websites. 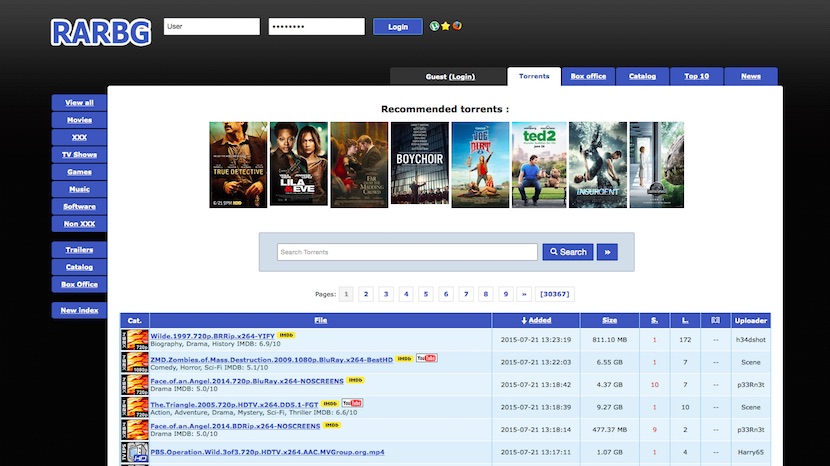 Rarbg began its journey in Bulgaria as torrent tracker And last year, taking advantage of the fall of The Pirate Bay again, it rose three places in the ranking of best websites to download torrents, going from the tenth place to the seventh that it occupies this year. Within the Alexa ranking, we find the Rarbg website in position 1326 of the most viewed web pages. 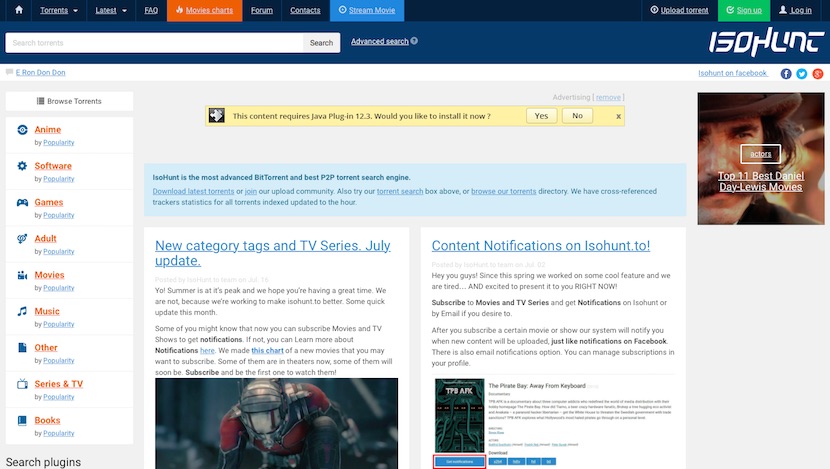 isoHunt.to was launched in 2013 shortly after isoHunt.com was shut down for legal reasons. This new website is not affiliated with the old one but structurally it remains the same, we could say that the spirit of the first continues in the second. The owners of this website are the same as those behind Oldpiratebay.org one of the first clones of The Pirate Bay which appeared when it disappeared for a few months late last year. 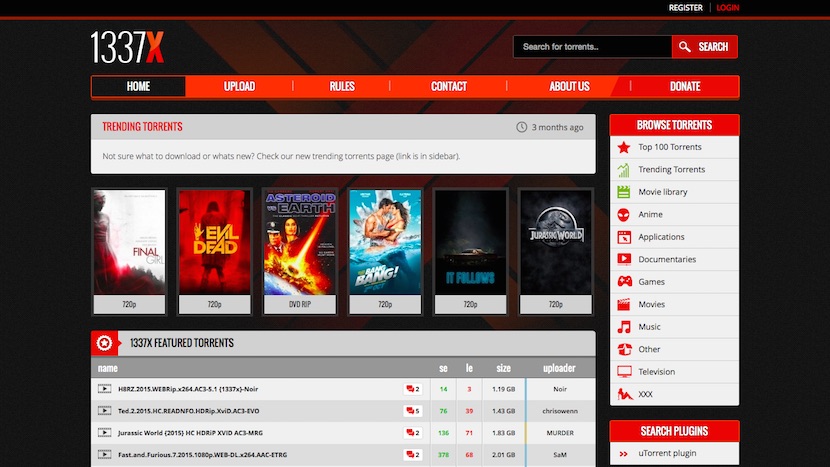 1337x it is another community run and maintained by the community. The website owners claim that they launched this site to avoid the lack of quality of the content of the torrent websites existing today, since most what they are interested in is that people visit them to get money for advertising instead of rewarding the quality of the content they offer. This year he was forced to close the .org version, so he had to move to the new domain 1337x.to. This website has dropped two positions compared to last year's ranking. According to Alexa, this website is in position 2581 of the most visited websites in the world. 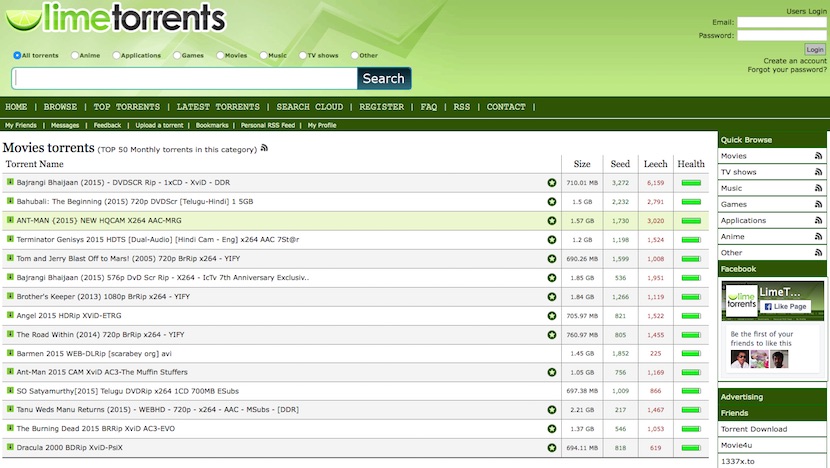 Limetorrents He is a veteran in this of torrenting and this year the ranking of the Top ten torrent sites. This website was the one that initially published the torrents through which Los Mercenarios 3 could be downloaded, even before reaching theaters, which caused the production company LionsGate to go after them with all their might. In the Alexa ranking we can find this website in position 2608.

If YTS is specialized in movie torrents, EZTV specializes in content extracted from television, such as series and television programs. Naturally, EZTV visits depend a lot on the content they have posted, but the most visits it receives is when series are released on TV with great success. Weekly dozens of new links are posted which attracts millions of visits which generates enough money to maintain the service without problems, regardless of the typical copyright problems that these types of websites usually face. EZTV has not changed its position compared to last year, while according to Alexa this website is in position 1262 of the most visited websites in the world.

In all these websites we can easily find torrents with English content but very hardly in Spanish, so we will have to resort to websites in Spanish such as NewPCT1, Elitetorrent, Divxtotal… The launch of the new intellectual property in Spain forced many websites to close, rethink their position in the market (seriesly) or Or to move its content out of the country to avoid that the Spanish authorities can get their hands on it.

The latest most recent case is that of the subtitles page in Spanish subtitles.es that lowered the blind on June 30. A few days later the ideal substitute appeared where we can find practically the same content tusubtitulo.com, but this time all the content including the server is out of the reach of the Spanish authorities. The case of this website is unusual since on its website there was no type of advertising that allowed the owners to enrich themselves thanks to the work of others, one of the reasons that the new intellectual property law in Spain penalizes.

But we not only have to resort to torrents to be able to watch American series or movies that, if they arrive in Spain, do so with too much delay and also dubbed into Spanish, an aspect that many lovers of the series deeply hate. I must admit that I have never had problems when watching series or movies dubbed into Spanish, but when you start to see them in the original version with subtitles it seems that our way of perceiving it changes, since you find more nuances than in the dubbed version you will never find like accentuation at certain times, emphasis on certain phrases…

I have strayed a bit from the topic. We can not only resort to downloading content via torrents, since in recent years there have been several applications that allow us to view the content without having to download it directly to our device, such as PopcornTime, which we have already talked about several times in Vinagre Asesino, and where we can find from recently released movies in the cinema, to the last chapters of our favorite series, as well as anime and adult films. Although if we only want to enjoy adult cinema, we can make use of Popcorn Time but only with adult movies called Porntime.