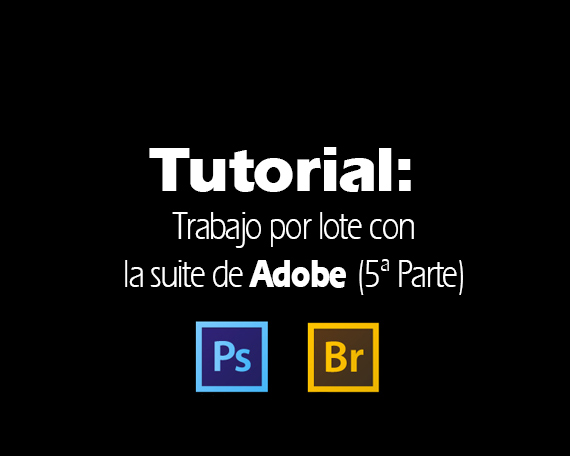 We are reaching the penultimate part, and we are outlining what would be the programming of the action and its subsequent execution. Here is the Tutorial: Batch work with the Adobe suite (part 5).

Programmable Actions are an important part of batch work, since without that pre-programmed Action, Photoshop I would not know which commands to execute or in what order, so Actions are an essential part of the company at hand. To carry out this part of the tutorial, you must follow the instructions found in the Tutorial: Batch work with the Adobe suite (4th Part). 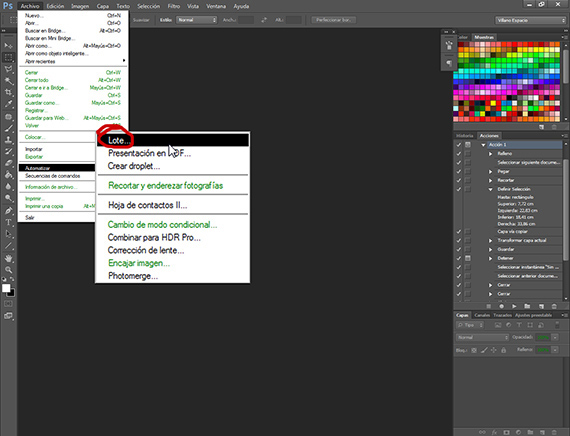 Once we have already programmed the Action and we have it in its new group, which I have named Creatives Online, we can modify this Action if necessary at any time, removing the commands that do not interest us or introducing new commands. We can also execute the Action partially, that is, if we do not want to apply the first two treatments, we click on the third and they will be executed from that.

Once we have the Action as we want it, we go on to prepare the group of photos that we are going to edit with it. First of all, we have to create two folders, one that we will name Origin and another Destination. These folders will help us to tell Photoshop from where you have to take the photos that we are going to retouch and where you have to leave them. These two folders are as essential as the Action itself to be able to batch work the photos. 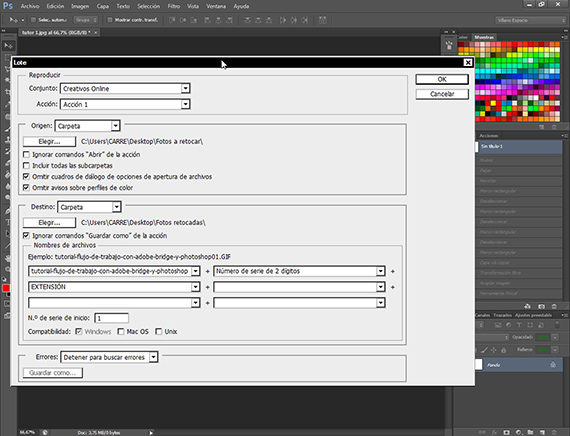 With the folders already created, we go to the route File-Automate-Batch, and once there, a tool dialog box will open with several options:

From: In this option we will choose the path or folder from which Photoshop will take the images to edit in Land. We can add images to the program from a folder, import them, images that are open or from Bridge directly. Today we are going to learn to work from a folder, so in the next tutorial we will teach you to work directly connecting the two programs. Once the folder option has been chosen, we click on the Choose tab and choose the path of the Origin folder. Of the rest of the options, we will point out those of Skip dialog boxes of file opening options, and Skip notices about color profiles, which will help us so that the process is not interrupted for each photo.

Destination: It helps us to choose where to deposit the retouched photos Photoshop. It offers us the option of Save and Close, which leaves them in the same folder in the same place, or the option Folder, which takes them to another folder. We choose the Destination folder, and as in the previous section, we are going to leave an existing option unchecked, that of Ignore Save As commandsof the action, since we have programmed in the action the command Save, which will help us to make the program's task easier. In the name of files, we will choose the name that we are going to give to each photo of the Lot, and the elements of which we want that name to be composed and in what order, being able to choose from different dating options, serial numbers of several digits , or extensions of all kinds and in the order we want. Choose the options that best suit your work. Then you have some more options that I advise you to investigate on your own.

Once the different options of this tool dialog box have been configured Automate-Batch, press Ok and the Photoshop It will automatically edit the photos and deposit them in the chosen folder.

In the last part of tutorial, we will see some more options about this type of work dynamics, and some interesting notes, as well as the tutorial files for you to practice at home.